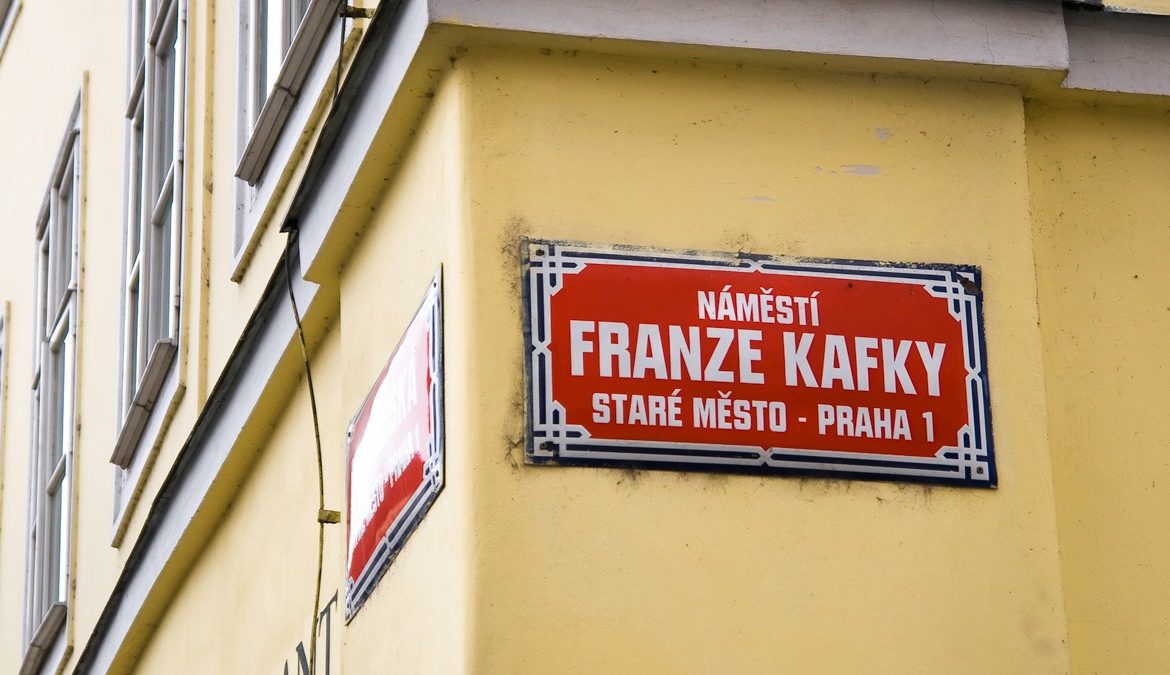 A city that has produced some of the most important writers of the 20th century, Prague has a long and illustrious literary history. The city of a thousand spires is responsible for nurturing the creative talents of celebrated writers like Kafka, Kundera, Rilke and Havel, and visitors can retrace the steps of these literary greats on a literature themed tour of the city. Snap a selfie in front of an iconic landmark, pick up some holiday reads in a cosy bookstore and learn more about your favourite Czech writers in one of many fascinating museums. Here are the best places to visit on a literature tour of Prague.

A City of Literature, Officially
In 2014, Prague became a UNESCO City of Literature. A hotly contested accolade, the city was chosen thanks to both its “outstanding literary heritage” and its “vibrant contemporary scene.” The Czech capital’s literary credentials include the fact that it’s home to the world’s densest network of libraries as well as a considerable number of grassroots publishers and events, independent bookstores and literary prizes.

Kafka’s Prague
Franz Kafka is one of the Czech Republic’s most iconic writers, and fans of Kafka classics such as The Metamorphosis and The Castle will have plenty of opportunity to explore the spots most closely associated with this acclaimed local whilst visiting Prague.

Begin your explorations where it all started, at Kafka’s birthplace. Set out for Prague’s Jewish Quarter and the corner of Kaprova and Maiselova Streets – Kafka was born in a house on this site in 1883. Go for a neighbourhood stroll and see if you can spot the surreal statue dedicated to the author.

The next stop is house number 22 on Golden Lane, located close to Prague Castle, where Kafka lived for a short time. The writer’s final resting place is also nearby and can be found at the New Jewish Cemetery, where you can practice the Jewish tradition of leaving a pebble behind in tribute.

Stop for refreshment at one of the city’s famed bohemian literary cafes. Kafka – alongside the city’s other literary talents – was a big fan of the Café Slavia, which is still open today. Order a potent absinthe coffee to sip on as you soak up the atmosphere that inspired the venue’s literary luminaries.

Must-Visit Museums
The Kafka Museum is one of the most renowned literary museums in Prague, offering a unique insight into the writer’s childhood – through objects such as letters to family members and drawings – as well as his literary legacy. Don’t leave without checking out the eyebrow-raising fountain outside.

It’s also worth paying a visit to Prague Literature House, which celebrates German-speaking Czech writers such as Kafka, Brod, and Rilke (German and Czech were both official languages here into the 20th century) with lectures, an ever-expanding library, and other interesting literary events.

A Good Read and a Great Cup of Coffee
Paris might have the iconic Shakespeare and Company store, but Prague has not one but two bookstores that reference the Bard. Make your way to Shakespeare & Sons, a Prague literature staple since 2002, and the Globe, the largest English bookstore in the city. Both schedule regular readings and literary events, have on-site cafes, and offer cosy nooks for those in search of a peaceful reading spot.

With a selection of new reads under your arm, your final destination should be Tynska Literary Café. A hotspot for the city’s bohemian crowd thanks to its warm, relaxed atmosphere and plentiful supply of coffee and beer, expect to rub shoulders with the city’s next generation of brilliant writers.