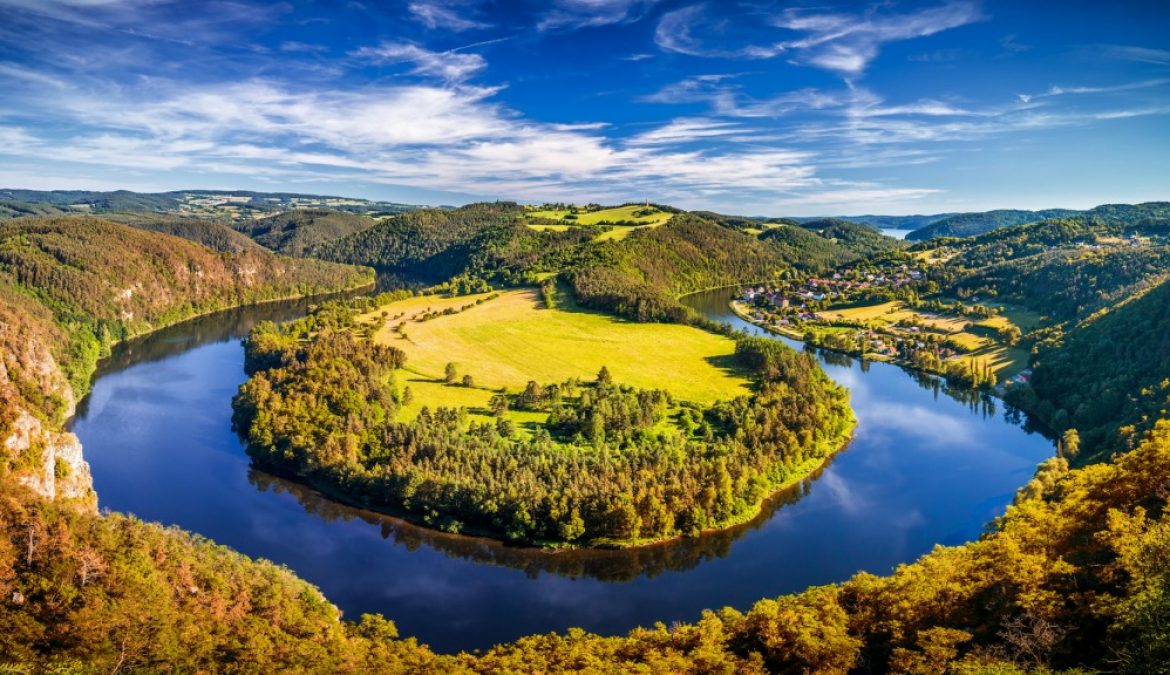 In 1874, celebrated Bohemian composer Bedřich Smetana released a symphonic poem entitled The Moldau. It was inspired by the currents of the Vltava, the Czech Republic’s iconic river. This national treasure ribbons 434 kilometres from South Bohemia through forests, hills and plains to Prague, the country’s medieval capital. It’s a rich seam of picturesque sights and precious vignettes of Czech life. Here are the sights not to miss along the Vltava.

Just up from the border of Austria, the turrets of Rožmberk Castle tower over a thickly forested U-bend in the Vltava. This castle is among the oldest in Bohemia, and is infused with rural Czech charm, the tiny hamlet of Rožmberk nad Vltavou clustering close around its walls. It’s now a museum bristling with the trappings of the erstwhile Czech aristocracy. Think ornate Baroque furniture and ancient armour, with a selection of Renaissance paintings an elegant backdrop.

Continuing up through the South Bohemian region, Český Krumlov is one of the most beautiful towns in the Czech Republic. Dubbed ‘pocket-sized Prague’, the town has held a place on the UNESCO World Heritage list for over 30 years thanks to its historic and architectural value. Overlooking this characterful town is the magnificent fairy tale-esque 14th century State Castle of Český Krumlov – a highlight for passing visitors – and the distinctive St Vitus Church, which dates back to medieval times.

The history of beer brewing in České Budějovice has its roots in the 13th century when King Ottokar II granted the town its official brewing rights. Consequently, České Budějovice is home to the Budějovický Budvar, a state-owned brewery that brews the original Budweiser and offers tours and tastings for ale enthusiasts. It’s not all about brewery in České Budějovice, though. The old town square, overlooked by the beautiful Baroque town hall and marked in the centre by the extraordinary Fountain of Samson, is a scenic spot to savour a cold one.

A little further along the Vltava River lies the captivating Hluboká Castle. After serving as a guard castle for 13th-century royals, the chateau was passed between a number of aristocratic families who carried out a series of Gothic, Renaissance, Baroque and Neo-Gothic reconstructions. The current building was modelled on Windsor Castle (the weekend home of HM Queen Elizabeth I of England) but hints from its previous designs can still be seen. Visitors can explore the castle and its rooms, or climb the lookout tower for striking 360° vistas.

Spliced in two by the Vltava is the capital of the Czech Republic. The river offers a rewarding way to enjoy the city’s most celebrated sights. There’s no shortage of river cruises, all of which duck under the famous Charles bridge and glide past the dazzling spires of Prague Castle with views of the broad, verdant bank of Petřín beyond. Continue a little further to discover Prague Zoo, whose menagerie of wild animals from across the globe are given a loving home in beautifully tended, expansive grounds.