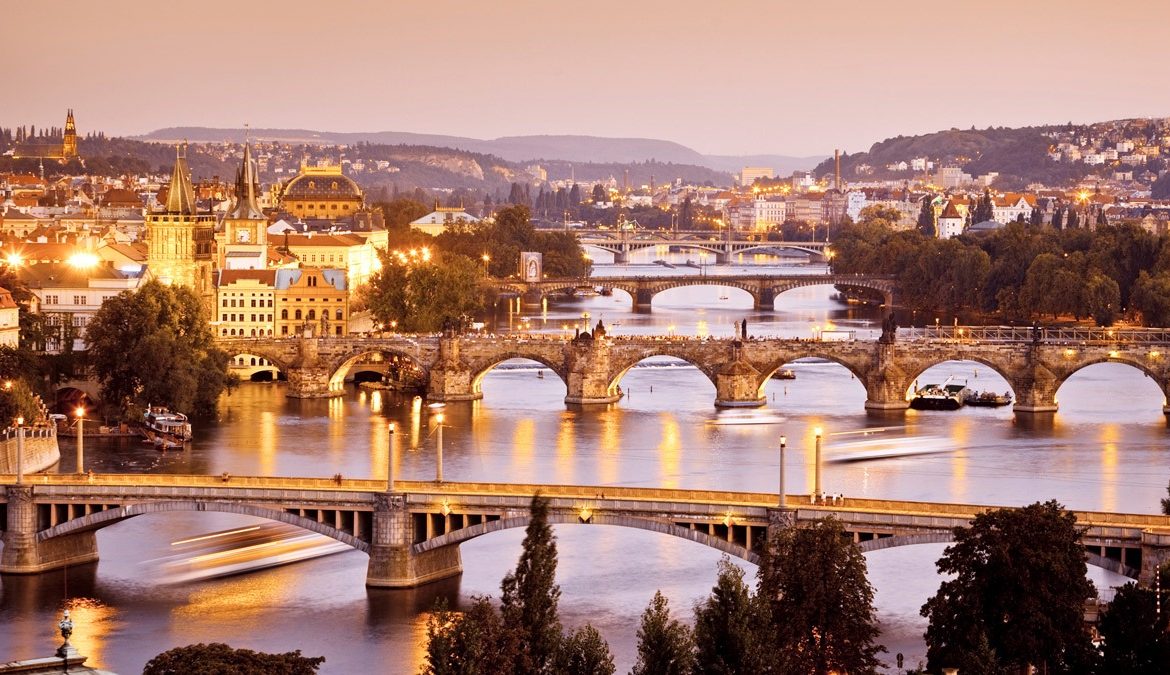 Often referred to as the City of a Hundred Spires, Prague could just as easily be nicknamed the City of a Hundred Bridges. Located on the banks of the Vltava River, the Czech capital is characterised by its assortment of bridges which tell the story of the city’s evolution. The 15th-century Charles Bridge is without doubt the most famous bridge in Prague but there are also plenty of others worth strolling across. From the Art Nouveau elegance of Čechův Bridge to the strikingly modern Troja Bridge, these are the most beautiful bridges in Prague.

Čechův Bridge
For a perfect example of Art Nouveau architecture, head straight for Čechův Bridge. At just 170m long, it’s Prague’s shortest bridge but what it lacks it length it certainly makes up for in design and history. Named in tribute to the Czech writer and poet Svatopluk Čech, look out for the distinctive green design with delicate festoon detailing, as well as the grand pairs of columns at either end which are topped with bronze sculptures of winged torchbearers – figures that also appear on the bridge’s base.

Palacký Bridge
Palacký Bridge is the third-oldest stone bridge still standing in Prague. The structure is an early example of caisson engineering and it features seven bold arches made from coloured granite. Originally decorated with sculptures of Czech mythology by Josef Myslbek, these ornate figures were moved to nearby Vyšehrad Park following WWII. The bridge takes its name from Czech historian and politician František Palacký and is, according to local legend, the bridge that Albert Einstein would cross every day as he commuted to work at the German University in Prague.

Legion Bridge
Built at the very end of the 19th century, Legion Bridge provides a connection between Prague’s National Theatre and Újezd. Built to replace the Francis I Chain Bridge and originally named after Emperor Franz Joseph, the bridge also allows access to Střelecký Island, a charming strip of land in the middle of the river which has its own café and restaurant and is often used for intriguing cultural events.

Mánes Bridge
The Mánes Bridge is a masterclass in Czech Cubism. Opened in 1914, it is named after the 19th-century Czech painter Josef Mánes. Spanning 186 metres, the bridge is formed of four main arches and while it was originally paved in mosaic, its surface has since been reconstructed to accommodate cars and a tram line. Keep your eyes peeled for the friezes of Vltava swimmers, as well as the more recently added brass plaques honouring Czech composers.

Troja Bridge
Open since 2014, Troja Bridge is the most modern of all the bridges in Prague and, for many locals, it is a symbol of this historic city’s journey into the 21st century. While most of the city’s bridges have a historic brick style, this contemporary build stands out with a distinctive white bowstring arch structure made from steel. This is one that’s ideally visited after dark as it lights up at night to stunning effect.